The Civet Cats mentioned in this blog post all refer to wild animals.  All Civet Cat coffee available on FinestCoffee is from free-range wild animals who live free to roam the coffee plantations, choosing the fattest and ripest beans.   These, the juiciest of beans, are the best tasting to the wild Civet Cat, and produce the best tasting coffee.

This means you get the very finest of Kopi Luwak Coffee, ethically. 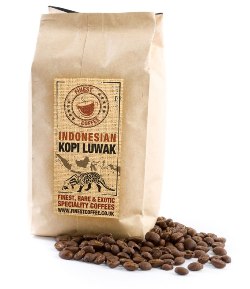 As a true coffee lover, you’ll have no doubt tasted a huge variety or different coffees throughout your lifetime. But, have you ever tried Kopi Luwak or Civet Cat Cofee? It’s one of the world’s most extraordinary coffees, sought like treasure in the Sumatran rainforest and certainly not to be missed.

If you’ve not tried it before, then you’d be forgiven for asking the question what makes Civet Cat Coffee so special? Well, Civet Cat Coffee is truly unique, as the beans (prior to roasting and packaging) are eaten and passed through the digestive systems of wild jungle Civet Cats.

The Cats eat the fleshy pulp of the cherry surrounding the bean, but their systems cannot digest the beans themselves. During the digestive process, the cat’s proteolytic enzymes seep into the beans more amino acids are created, and afterwards the stools are collected, and the undigested beans removed.

Using Civet Cat Coffee beans to make coffee is not a new trend nor is it a passing fad. Its origin dates back to the 18th century Dutch colonies on the Indonesian Islands of Sumatra and Java. Cash-crop coffee plantations were created by the Dutch, and during the period between 1830-1870, the native workers and farmers were banned from picking the fruits for their own personal use.

The natives wanted to try the coffee for themselves however, and they soon discovered that wild jungle Civet Cats were eating the fruit of the coffee plants but leaving behind undigested seeds in their droppings. The locals collected and cleaned them before being roasted and consumed.

The flavour and the unusual production process rapidly made this Civet Cat Coffee famous in the region, and it soon became a favourite with the Dutch plantation owners.

The coffee remains highly sought after in Sumatra, and is becoming increasingly popular throughout the world.

Are there any health benefits of drinking Civet Cat Coffee?

You may already know that this extraordinary coffee has a rich and pure flavour, but what you may not have been aware of was that it is said drinking Civet Cat coffee also has the following benefits.

Studies have shown than drinking 2 cups of Civet Cat Coffee on a daily basis could aid in reducing the risk of non-melanoma skin cancer by 17%. It could stimulate the skin to regenerate cells and can also help prevent the further growth of tumours.

2. You shouldn’t feel terrible after drinking it

Whereas usual coffee can often lead to a feeling of bloating, heartburn, nausea and headaches, Civet Cat Coffee should do no such thing. This is due to the extra enzymes which seeped into the beans during the civet cat’s digestion.

3. It can protect your teeth

The anti-bacterial effect of Civet Cat Coffee could also good news for your teeth. By killing enamel-destroying bacteria, this coffee could actually be doing you and your nashers a big favour.

So whether you’re someone who is intrigued by this unique coffee, or just completely baffled by the whole idea, it’s certainly something you need to try at least once. And who know, perhaps you’ll just love it?